The first major European contact on St. Croix happened in 1493, when Columbus touched down on the island to find supplies and guides for the next leg of his journey. From then on, St. Croix went relatively unnoticed by Europeans until the first half of the 17th century when French, English, and Dutch colonists tried to settle on the island (Hardy 2011: 42). The English were first, but were ousted by the Spanish presence on the nearby Puerto Rico island. The French tried next, but the same result occurred. Finally, Jan Snouck obtained a charter from the Danish West India Company to settle St. Croix. The Dutch then proceeded to settle near present-day Christiansted, then called St. Jean. Their harbor was called Bassin, which would become a centre of many passing trade ships. The exact date of Dutch settlement is unknown, but is estimated to have been between 1642 - 1650 (Hardy 2011: 42). However, tensions on the island grew between the English and the Dutch, which culminated in the deaths of two governors and the English remaining the only inhabitants on St. Croix (Hardy 2011: 43).

In the 1650's, control of the island then passed hands again, as a French colony and eventually under the direct control of the French Crown (Hardy 2011: 44). Finally, the Danes were successful in colonizing St. Croix in 1671 because of the chartering by the Danish West India Company (Hardy 2011: 47). Due to tensions with the pre-existing English, however, the Danes were unable to actually settle until 1717. Eventually, in 1733, King Christian VI of Denmark purchased St. Croix from France, when it could finally be considered fully under Danish rule (Hardy 2011: 48). The settlement proceeded quickly, with the Danish colonists burning more forests to create cultivatable land for cotton and sugar cane. When governor Moth arrived at Bassin in 1734, he remarked that within the town, there was the remains of a French church that could be repaired. The town was then renamed Christiansted and became the administrative centre of Denmark's West Indian colonies until 1871 (Hardy 2011: 49). Although control of the island was under the Danes, St. Croix had a sizable inhabitants of the English and African slaves. Thus, the island became a creole culture hotspot, with the primary language being an English-based creole and had many multicultural customs. Danish rule would change the island many times during the next 200 years, until the United States finally acquired St. Croix as part of the Virgin Islands during World War I. 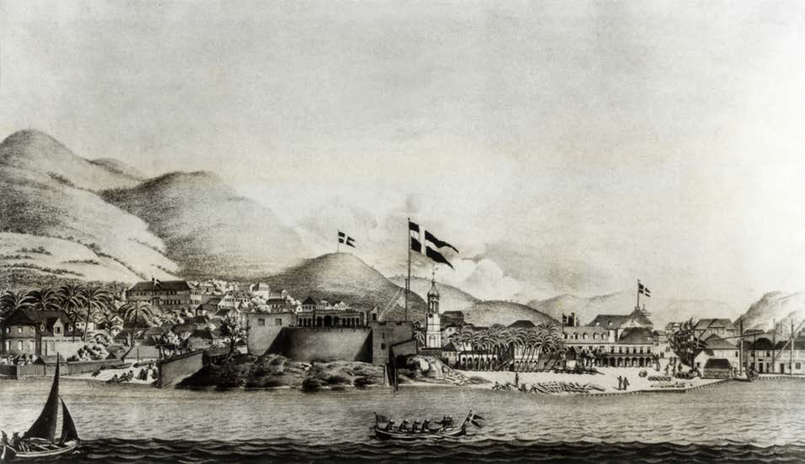 View of Christiansted harbor from the sea by Theodore C. Sabroe, 1835, with the fort in the background(Reproduced with permission of the Danish Maritime Museum).

The Danish West India and Guinea Company was the third royally charted company to manage much of the country's slave trade. The company had its headquarters, administrative buildings, and warehouses in Copenhagen ("The West India and Guinea Company 1671 - 1754"). The activities of this company were centred around trading and shipping in the Danish West Indies. It therefore had a monopoly on the West Indies at that time, and had a need for facilities to support its enterprise. In 1749, a permanent warehouse was built to accommodate all the supplies that the company would need, such as sugar, molasses, and rum, and cotton (Lawson 2004: 13). The warehouse complex was a centre of the company's activities on St. Croix as it was used to house many supplies and also to auction slaves in the main courtyard. In addition, the main building of the complex provided offices and living quarters for the officials involved with trade (Lawson 2004: 13).

However, the end of the company came in 1754 when the Danish government decided to buy out the shareholders and liquidate the company ("The West India and Guinea Company 1671 - 1754"). The Danish government therefore took over administrated of the previous West India and Guinea islands. St. Croix was then opened to all Danish citizens and had much more freedom. However, the Warehouse Complex was kept as it was still deemed useful for the economic conditions of the island. The Warehouse itself would undergo many modifications over the years, including being turned into a military depot and finally a trading post.

Discovery of the Stock House in the Excavation

When the mahogany stump was removed, under the defunct waterlines, the remains of a wall were discovered. The wall was built of old yellow Danish brick and appears to be part of the stock house associated with the Danish West India Guinea Company Warehouse Complex (Torres). This stock house is noted in the 1803 floorplan of the complex. Thus, a copious number of artifacts were found near this location and are likely to be around their original positions. All of the artifacts displayed on this website are from that area and are very likely to be associated with previous items in the stock house. 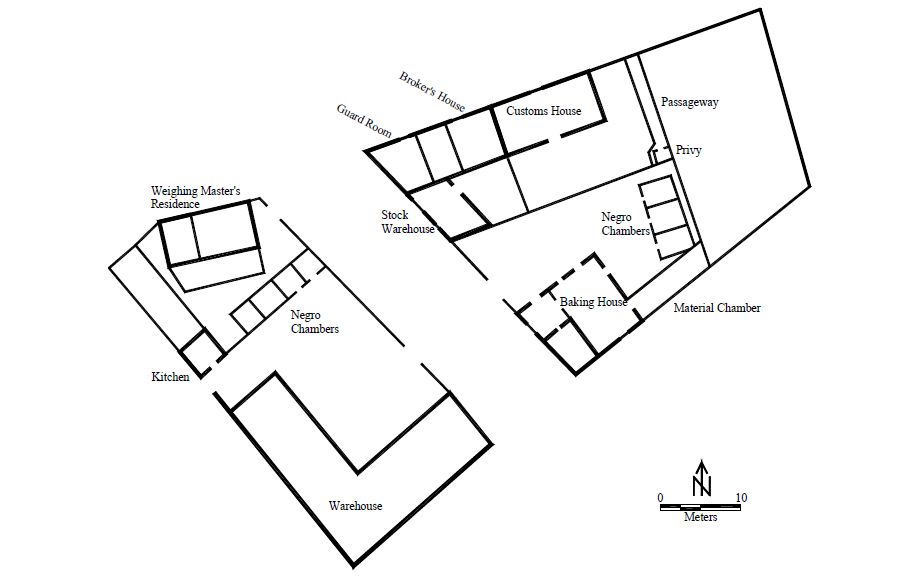 Location of the stock warehouse in relation to the other buildings (Lawson et al 2004: 46). 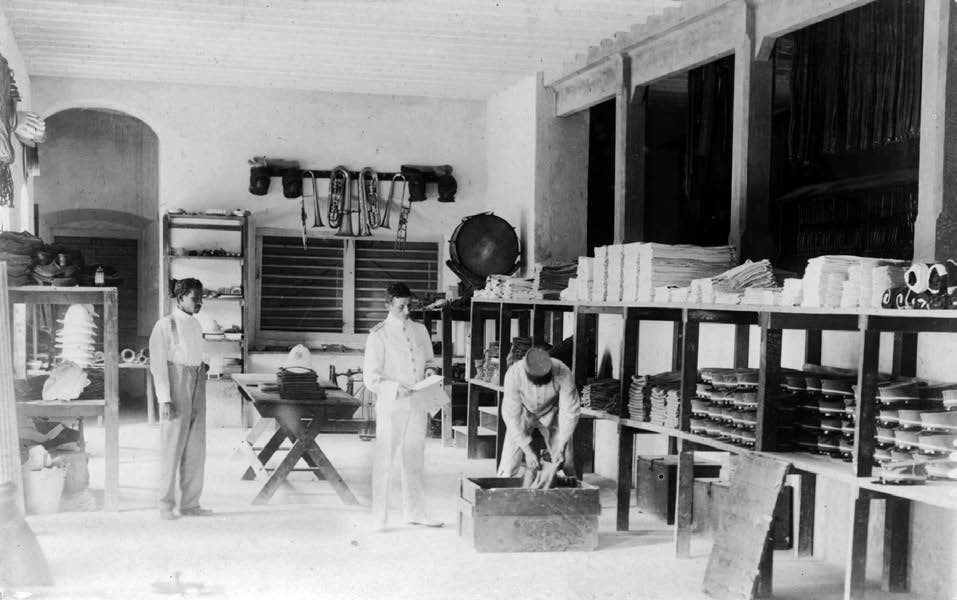