Artifact frequency analysis was performed on the database of the artifacts found in the site of the stump removal. Below are the graphs that were produced of the relative frequencies and counts of the overall and specific classes of artifacts. 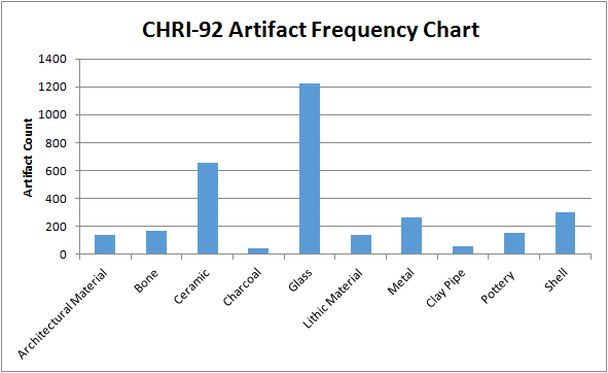 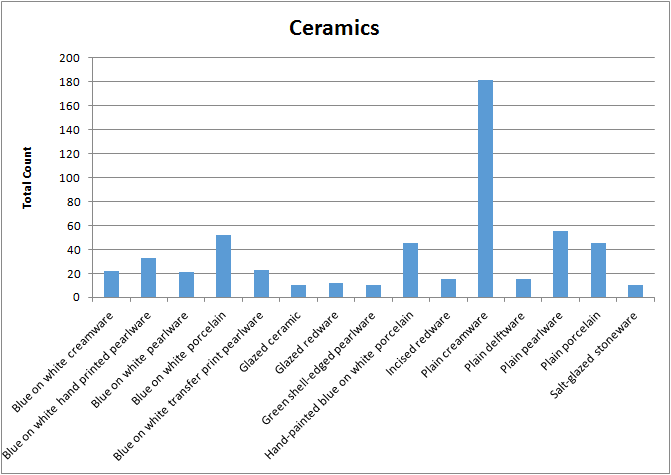 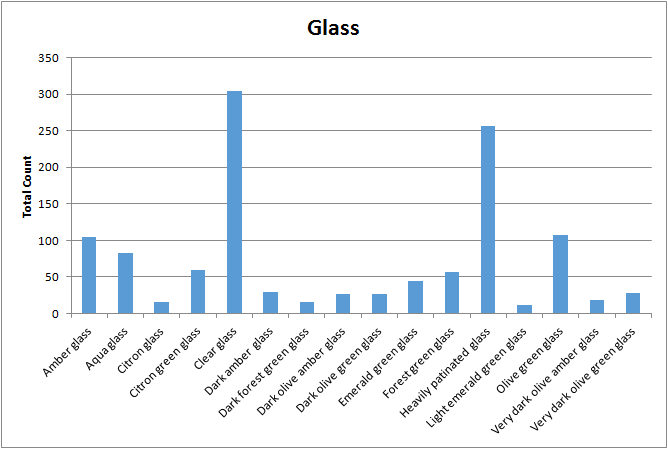 As evidenced from the frequency analysis charts, glass and ceramics were the most common artifacts. This being a stock warehouse, it is no small wonder that the things that would most often function as containers were the ones left behind. However, there is a certain uniformity in some of the categories, being that clear glass and plain creamware were by far the most commonly found. This being the “mass-manufactured” items of the colonial era, it can be assumed that the Danes on St. Croix were relatively well-off, receiving decent funding from the government to continue their operations (DeCorse 1993:168). However, there is also evidence of the passage of time and technological advancements on the islands. For example, the next most frequent identified colours, amber and olive green, were sort of the predecessors to clear glass, to which many glass makers strove for. The mass-produced quality of clear glass is a clear advancement in the times and technology of Europe, while the other colours represent a previous age. Before clear glass, most glass were the subdued colours of olive and amber and were used for just about any bottle purpose, from sauce to drinking (Lindsey 2015). Therefore, the transition of the multitude of colors of bottles used to mostly glass can attest to the many transformations that the site has gone through, from rule by the French to a permanent warehouse for Danish economics.


The next largest category, ceramics, has a plentiful variety of different colours and types that can be indicative of the amount of intermingling that went on at St. Croix. Other Danish sites in Africa, such as those on the gold coast, did not have as many ceramics or pottery produced, and in such variety as what is found in St. Croix (DeCorse 1993:166). While the most common were the often mass produced storage units used back then, there are still shards of porcelain, a rather expensive brand, and many decorated pearlware that did not serve to just sit in a storage room all day. The Danes themselves were also less averse to creating a cultural heterogeneity than other empires such as Spain and Britain, which would have contributed to the variety of items found (Armstrong 2008:98). Further a testament of the cultural mixing of Danish rule is the rather large fragments of Afro-Crucian ware made by the local slave population most highly around the second half of the 19th century (Gartley 2015:49). The fact that such things were found so near the Warehouse Complex first suggests the very wide number of slaves and their intermingling among the European populace, and perhaps others in a much less segregated fashion than what other European colonists would have done.


What all of this information suggests for the overall economy of St. Croix is a coarse timeline of the rise and downfall of its profitability. First, the importation of slaves to the island reached its zenith around the mid 18th century to the very beginning of the 19th century. Consequently, was when the permanent warehouse for the Danish West India and Guinea company. Therefore, the multitude of mass produced clear glass and plain creamware would likely date to around that time frame as well, and perhaps a bit later. The fall of a Danish-controlled St. Croix came around the turn of the 20th century, as by 1899, the Danish government was showing a considerable loss in the operations of St. Croix. This lead to the purchase of the Virgin Islands by the United States in 1917, transferring ownership of these islands from Denmark to America (Tansill 1932:239).